Unitary patent and its jurisdictions

The reform setting up the upcoming unitary patent system is based on the following three legislative acts:

The two Regulations were published on December 31, 2012.

Poland didn’t sign the Agreement, because of incompatibility with its national law, as well as Spain, that contested the language regime of the new system. Croatia became an EU Member on July 1, 2013, however, it is not clear whether Croatia will join the new system or not.

As a matter of fact, not all the actual 28 EU Member States joined or will join the new system. Therefore, the misleading definition “community patent” should not be used to indicate the new system. 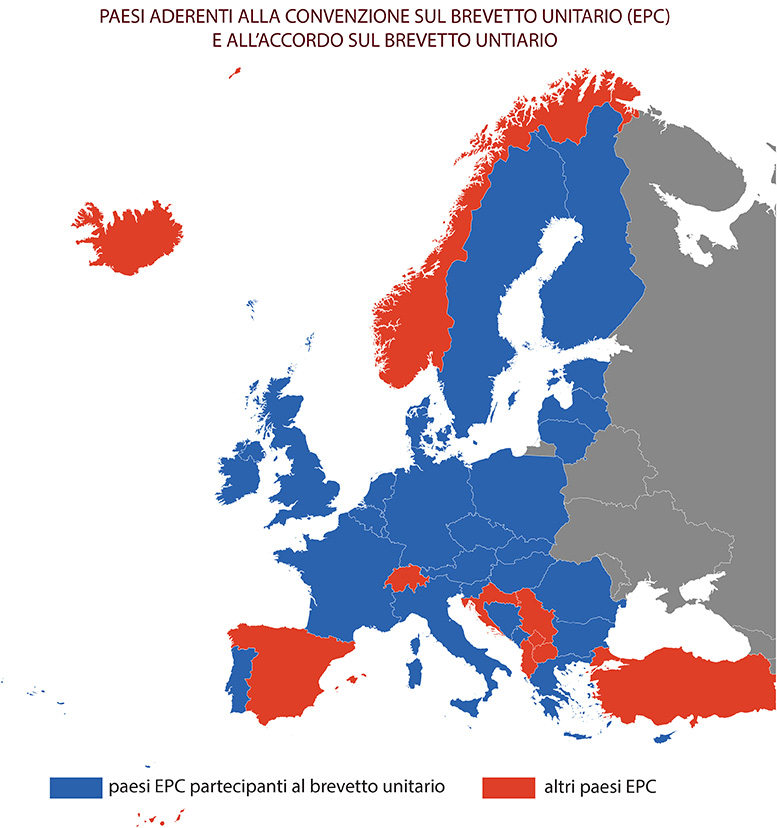 When the unitary patent system will be implemented

In order to get the new system up and running, the two regulations UPR and UPTR and the agreement UPCA need to be ratified by at least thirteen member states out of the participating 25, including France, Germany and the UK.

The ratification process was expected to end in 2016, but this did not happen. Moreover, there is now uncertainty due to the outcome of the so-called ”BREXIT” referendum to leave the EU. Recently, though, the UK has announced their intention to ratify. To date, only eleven states have ratified the agreement and regulations (list here).

How the unitary patent package is supposed to function

The EPO will take on a number of additional tasks. For example, it will administer patentees' requests for unitary effect. It will also be responsible for collecting, administering and remitting renewal fees for unitary patents and for keeping a register of unitary patents which will include legal-status information such as licenses, transfers, limitations, revocation or lapse.

Starting from filing of the application, passing through the examination proceedings and up to grant, the procedure will be identical for both unitary and European patents. The procedure, the criteria and the rules for examining patentability laid out in the European Patent Convention,will be the same for both types of patents.

Differences between the Unitary patent and the existing European patent will become evident in the post-grant phase, when the patent proprietor has to decide which geographical coverage is needed.

- a traditional European patent with individual territorial protection in the designated states (a bundle of national patents, from which each national patent is bound by the relative national law of the state where it has been validated), as it is now, or - a unitary patent with unitary territorial protection in all the 25 participating states, or - a hybrid patent, i.e. a unitary patent valid in those 25 states, plus single validations of a EP patent in any of the 13 states which are members of the EPO but did not join the new system or are not EU countries. 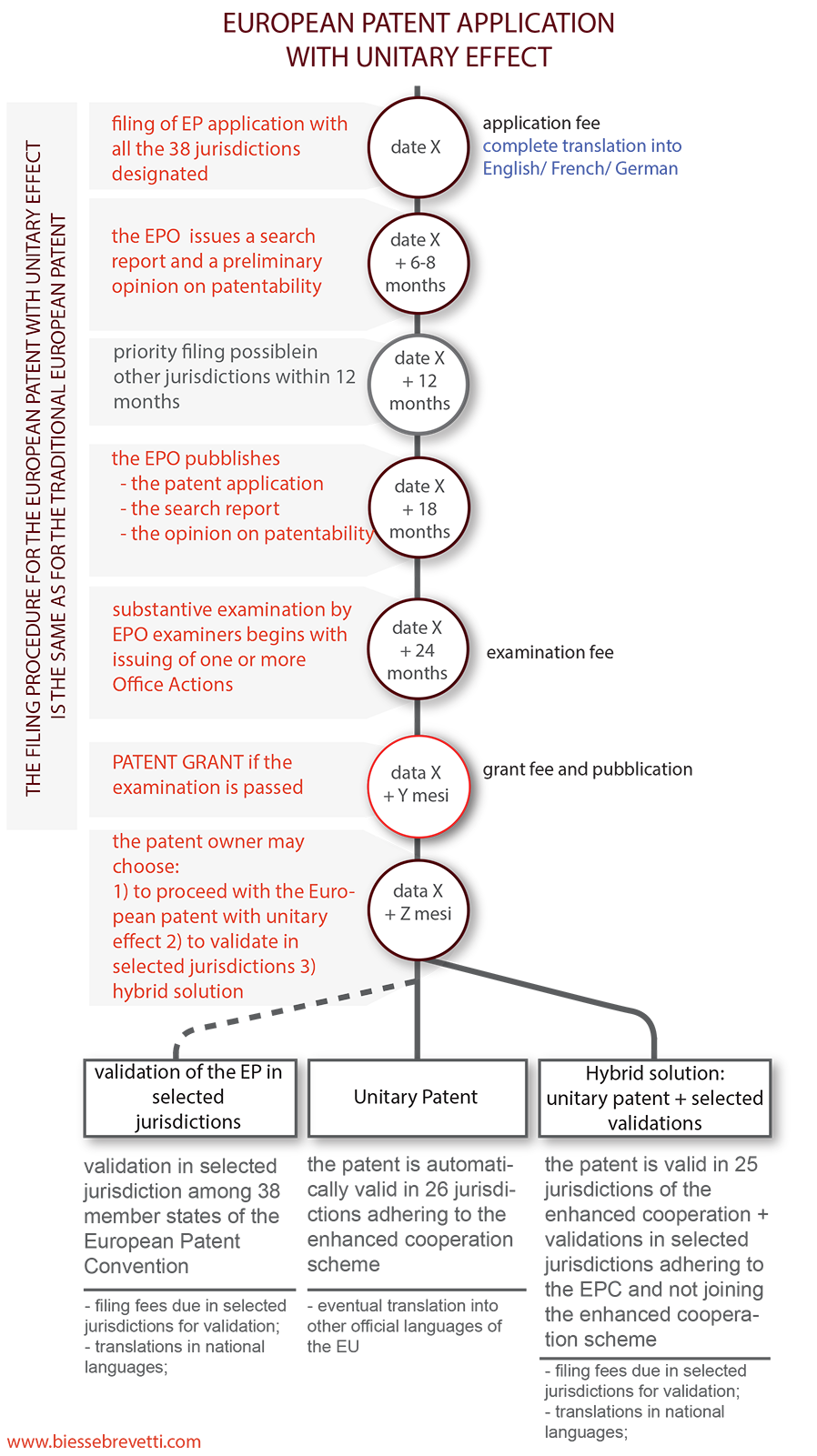 Thus, the states that signed the European Patent Convention (EPC) but are not members of the European Union, for instance Switzerland, Norway and Turkey, will not join the new Unitary Patent system. Nevertheless,it will be possible to obtain a Unitary patent in 25 EU states and also validate in such non-participating countries or non-EU countries.

What advantages the new unitary patent system brings to an applicant

Currently, once a European patent is granted by the EPO, it has to be validated in each EPO member state for which the patent proprietor seeks patent protection. For this purpose, many states require a complete translation of the patent in their official language(s). This complicates the administrative procedure and increases costs.

Unitary patents will be automatically valid across the territory of the 25 participating countries without being translated in the corresponding national languages. Therefore, applicants will benefit from the fact that no validation procedure is foreseen.

It will not be possible to obtain unitary protection and also validate in individual participating EU Member States for the same patent.

How much will the unitary patent cost?

The new system could offer cheaper patent protection across Europe. However, most of the patent owners choose not to cover all of the EU countries for various reasons. In fact, it is estimated that only 1% of all patents is validated through all of the EPO countries. Most of the patents are validated only in Germany, France, Netherlands and the UK, and a consistent number is validated only in one or two of them. In the short and medium terms, a new more affordable option may occur, similar to the unitary patent, that could slightly increase the percentage of the patents validated throughout the 25 participating states. But the fact that a unitary patent would fall under the exclusive jurisdiction of the UPC, and thus could be annnulled in a single central action, would surely serve as an important deterrent. So based on the existing strategies of filings and validations and on risks and benefits of the new system, it is likely that at a certain point, the unitary patent may lose its attractiveness for many applicants.

Notwithstanding, it is worth mentioning that the cost for the annual maintenance of a unitary patent is based on a “top 4” approach. This means that the annuities due for a UP are a sum of the annuities of the four most validated countries (the UK, Germany, France, the Netherlands). Apart from other strategic considerations, the cost-efficiency of large patent portfolios might become one of the most critical and attractive issue to address with the new unitary patent package.

As conventional European patent applications will be used as a base to obtain unitary patents, filing and prosecution costs up to grant of the patent would remain the same for both options.

The granted unitary patent does not need to be validated nationally, country by country, without incurring translation costs and with no need to appoint a professional representative in each country.

The renewal fees of the unitary patent

As indicated above, based on the “top 4” scheme, the unitary patent renewals are the sum of the renewal fees of the four most validated countries (France, Germany, the UK and the Netherlands). Therefore, based on this model, the European Patents validated in more than four countries are likely to be more expensive to renew and European Patents validated in fewer than four countries are likely to be cheaper.

SMEs and Universities would receive a 25% reduction in renewal costs for the first 10 years.

All the unitary patents and the European patents that have not been opted- out at the due time, will be subject to the Unified Patent Court (UPC), thus litigations and revocation procedures will be performed under the UPC jurisdiction. Only national patents will be outside the UPC jurisdiction. Once the transitional period is over, it will no longer be possible to opt- out of the European patents in order to avoid the UPC.